Harnad, S. (2007) The Green Road to Open Access: A Leveraged Transition. In: Anna Gacs. The Culture of Periodicals from the Perspective of the Electronic Age. L'Harmattan. 99-106.

Harnad, S. (2009) The PostGutenberg Open Access Journal. In: Cope, B. & Phillips, A (Eds.) The Future of the Academic Journal. Chandos 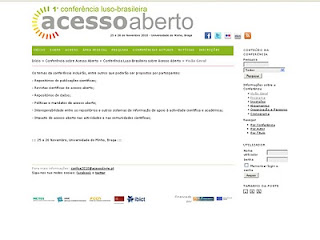 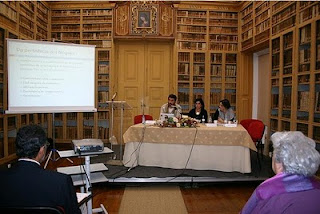 A Biblioteca 2.0
oportunidades e desafios para as bibliotecas do século XXI
18 de Novembro de 2010
Sala de Leitura da Biblioteca Pública de Évora
Convidado Olivier Le Deuff
Universidade Europeia da Bretanha
blogue Le Guide des égarés
Library 2.0 and the Culture of Information
resumo
Our speech will be divided in two different parts.
First, we will try to show the genesis and the evolution of the library 2.0 concept. We conducted a survey to understand the professionals' perception of a currently outdated concept. It seems that the biggest evolution with web 2.0 tools is the necessary development of new skills for the librarians in a digital environment. Maybe the new perspectives for library are more hybrids with web of data technologies.
In a second part, we would like to demonstrate that Culture of information is both a possible translation and a more ambitious vision of information literacy.
Information literacy has three different historical ways:
The economic design: the term information literacy has been used for the first time by Paul Zurkowski, president of the Information Industry Association (IIA) in 1974. He wished that employees would be better trained in management of information.
The librarianship influence: it is by far the best known, it represents the bulk of publications. It is especially after the text of the ALA (American Library Association) 1989.
The civic dimension: in 1976 the librarian Major Robert Owens defined information literacy as a civic skill ensuring the sustainability of democratic institutions.
The third way of information literacy has not been well developed in the end, especially considering its historical and theoretical foundations are the components of information literacy. To better understand this dimension of citizenship, a return to the Enlightenment and the encyclopedic project is necessary. The civic dimension of information literacy is based on the maturity of Understanding and the maturity with technical objects (Simondon, 1989).
Postado por Luísa Alvim às 08:52 Sem comentários: 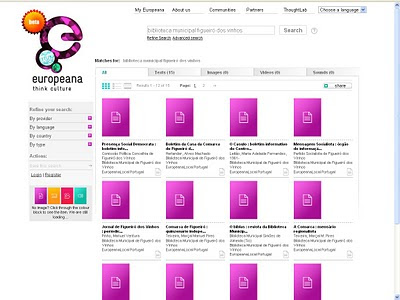 V Congresso Bibliotecas Públicas 3 Nov.  - Mesa redonda
Kathryn Greenhill, Profesora asociada de Biblioteconomía y Documentación, Curtin University of Technology, Perth (Australia)
This discussion paper has been prepared for the V Congreso Nacional de Bibliotecas Públicas: Biblioteca pública y contenidos digitales: retos y oportunidades to be held in Gijón, Spain 3-5 November 2010.  This is preliminary material for the Day 3 Roundtable discussion topic,Reflections on the value of public libraries in the digital society.
The concept of being “deeply local” at our libraries is explained further in an earlier blog post here:
Getting Deeply Local at our libraries.
The key for libraries to thrive in the new digital landscape is to get deeply local. The video and transcript below outlines the components of the deeply local and what libraries can do to exceed their client’s expectations.


Libraries have a competitive strength over Google or Amazon or off-the-shelf one-size-fits-all databases.
We can use human skills to know intimately our communities and their information needs. We can know what type of information they want, how they prefer to get it and ask them questions.
We can provide platforms for creating local content and match existing content to the needs of our communities.
Rather than declining in a world of born-digital user-created content , libraries have a chance to occupy a central place in our communities.
We do need to change the way we do things.

1. Community – Knowing intimately our communities and their informational, recreational needs. This could involve chatting regularly to our users, conducting non-user surveys or analysing the hits on our website.
2) Content – Knowing the content available for our local community and by our community. This includes local history collections in local libraries and institutional repositories in academic libraries.
3) Local linking – Linking our community with each other via local content, or content that meets their informational needs. Encouraging study groups in our buildings or hosting a social network for a local bookclub is an example of this.
4) Linking to the world – Linking the world to local content. Linking our users to the local information   hosted elsewhere. Essential in this is providing free and open access to material produced with public money  and understanding about the best ways to get data in an out of our systems for remixing.

5) Knowing possibilities – Knowing what is available and possible with information and content – and bringing that back to our communities and matching it to their needs.


Getting deeply local is not about doing exactly what our users want – we can do better than that. It is about library staff knowing about how to connect people and information so well that we exceed our users’ expectations.